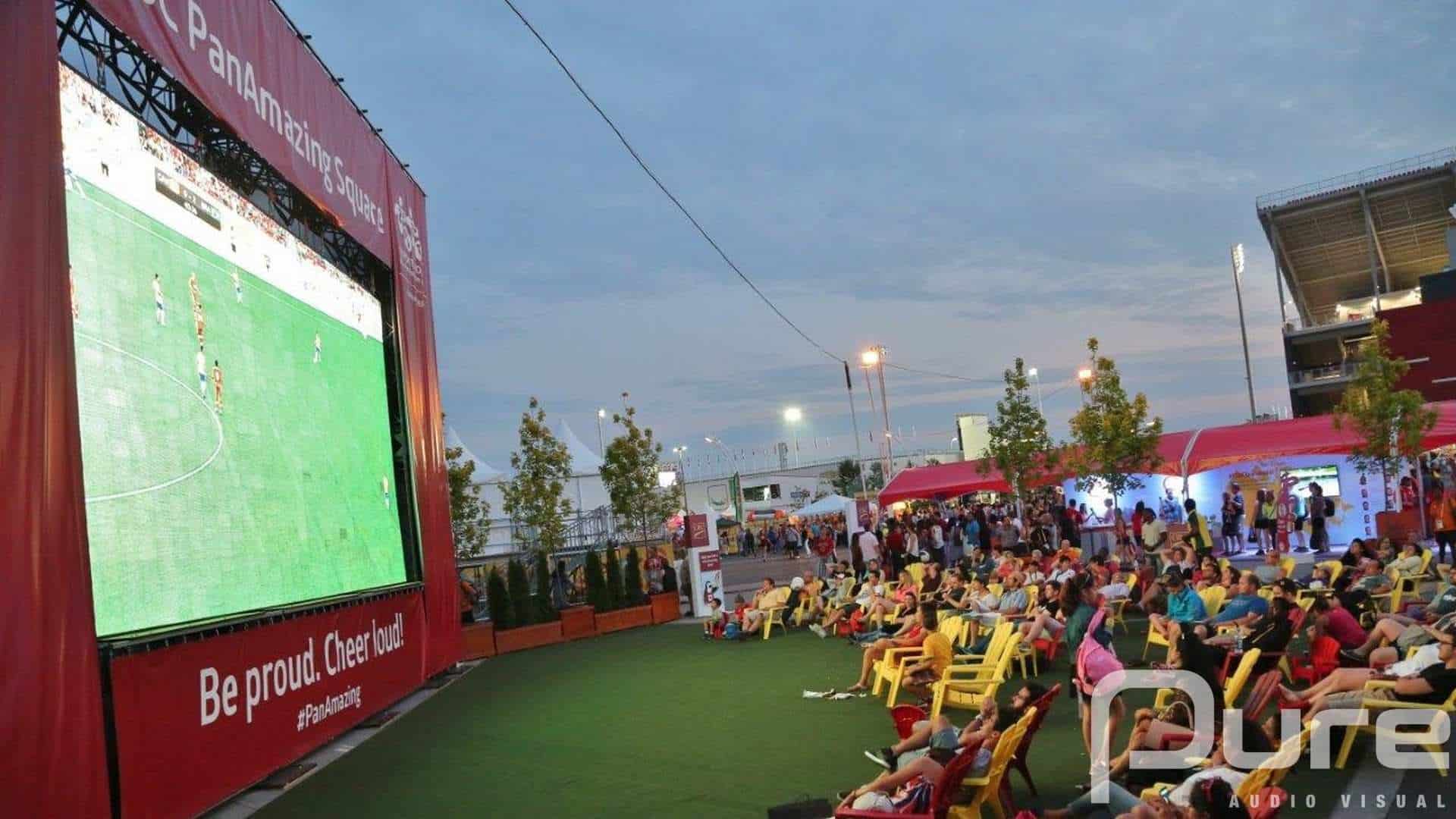 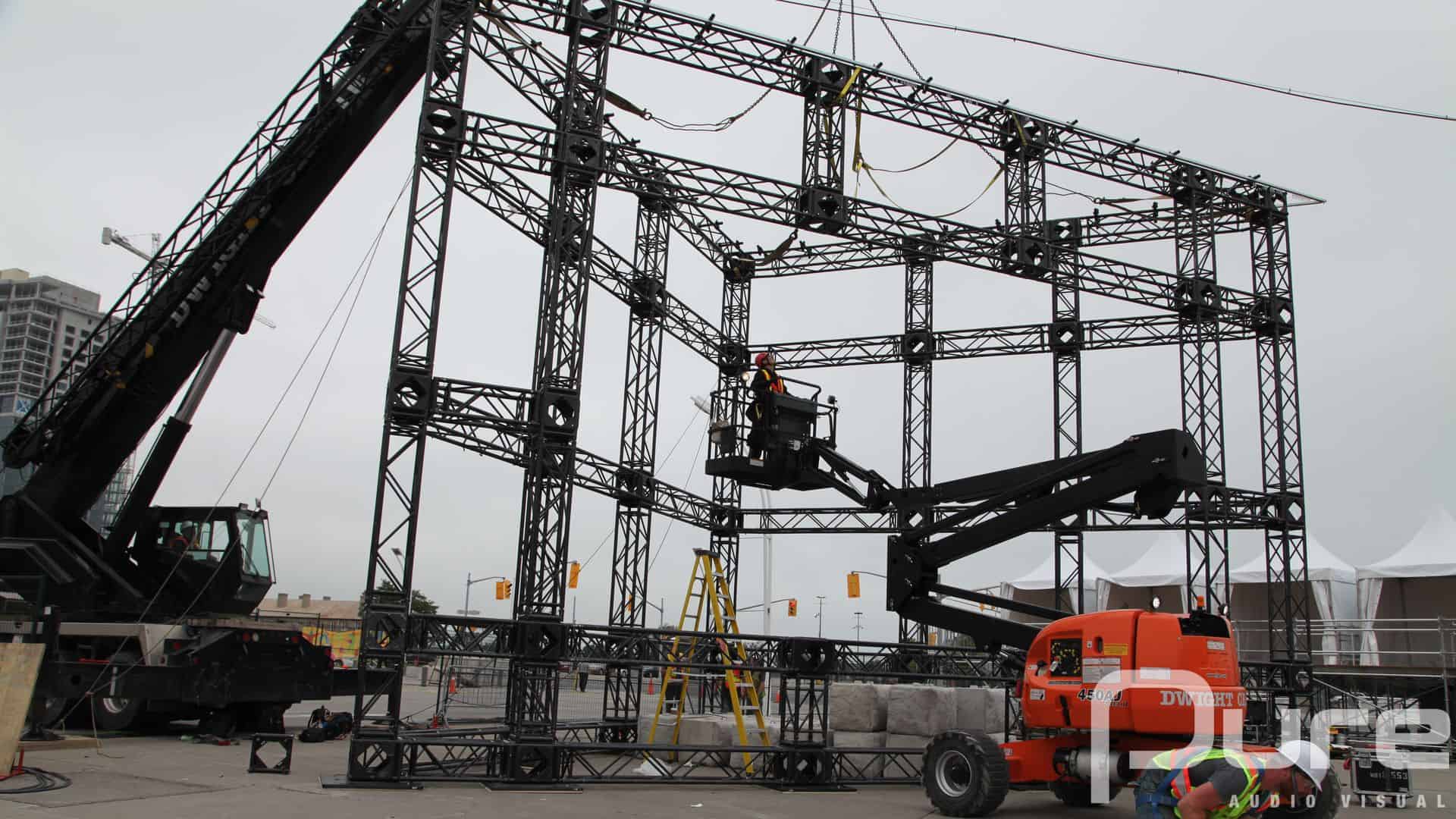 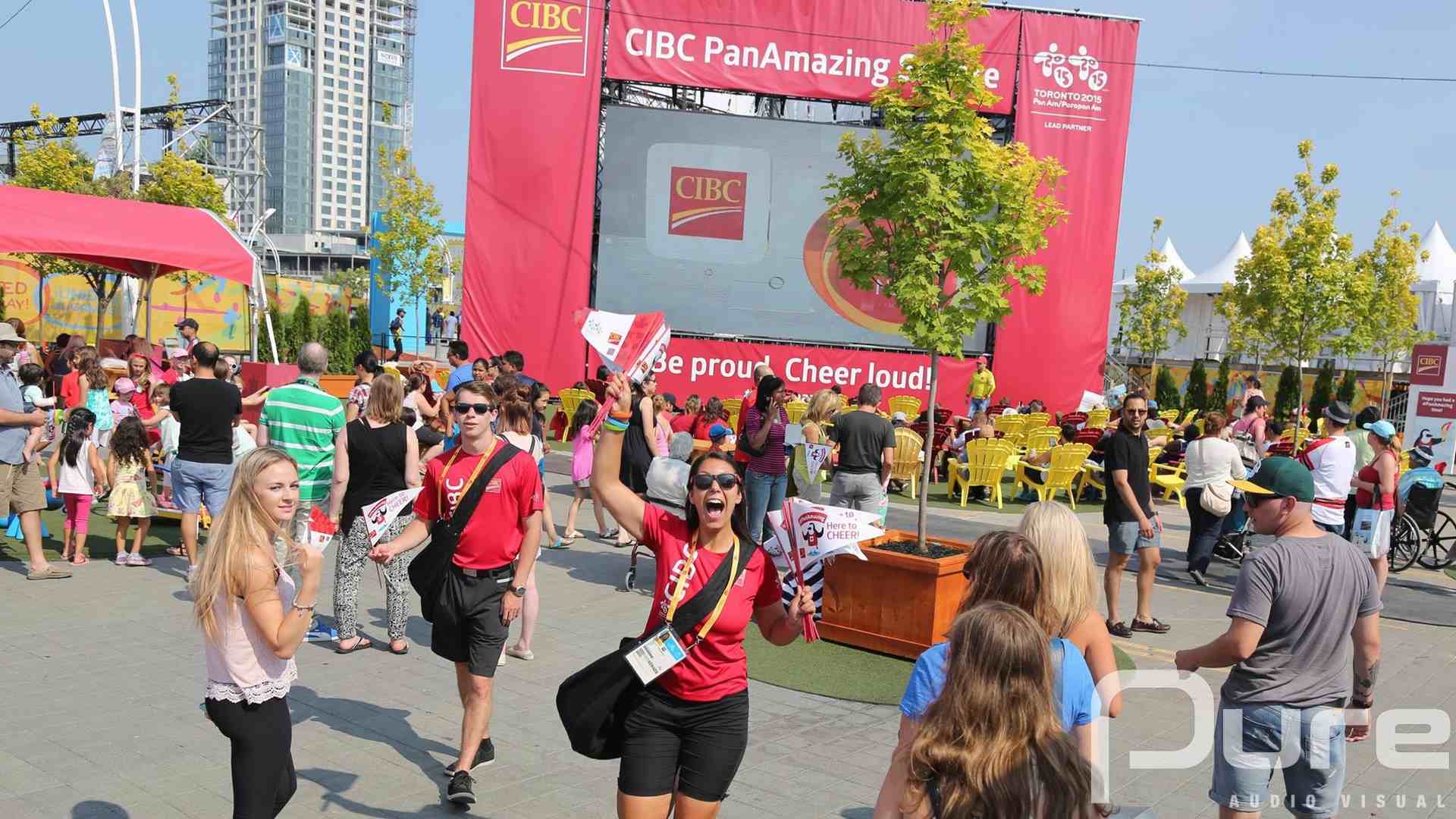 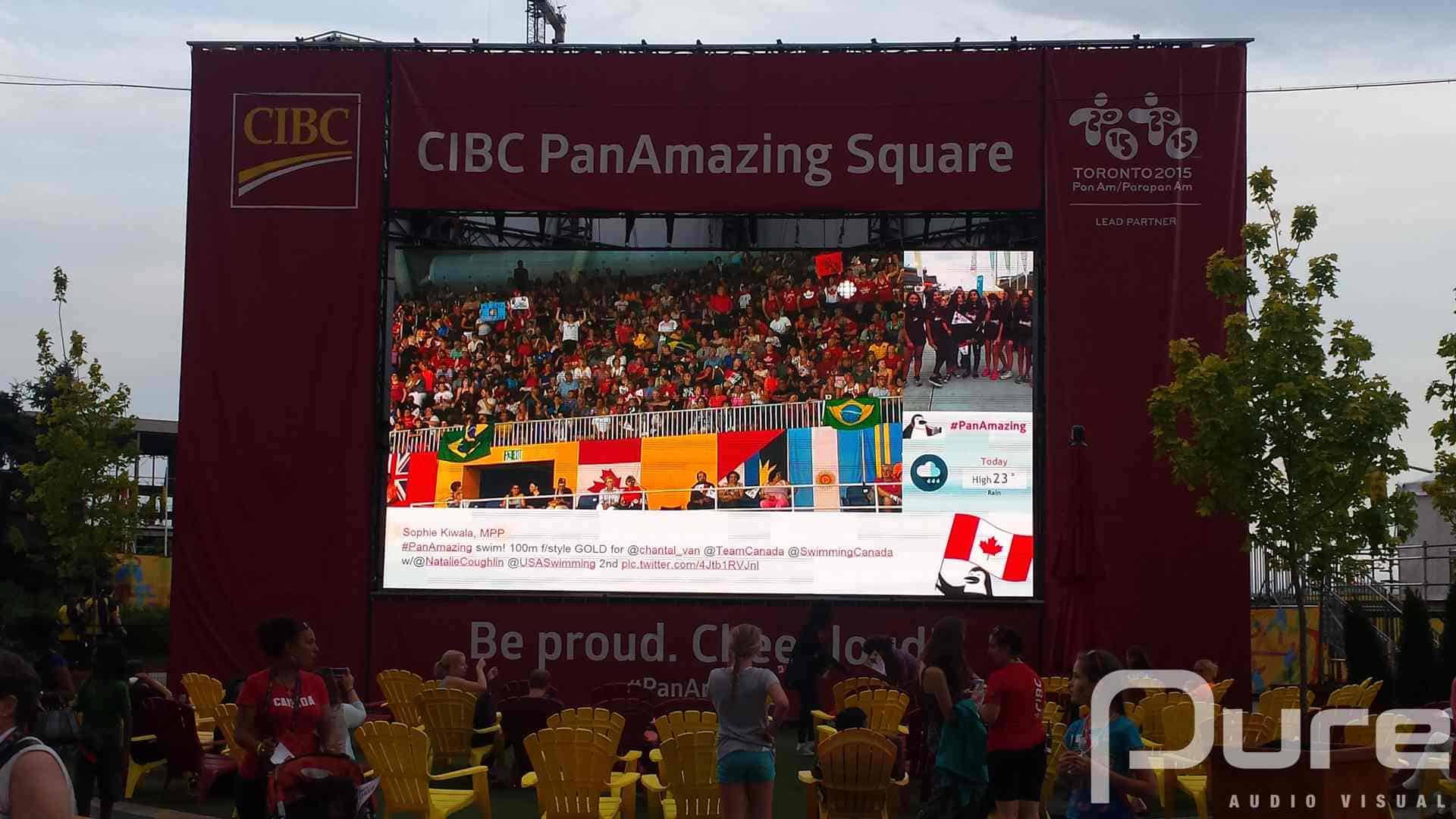 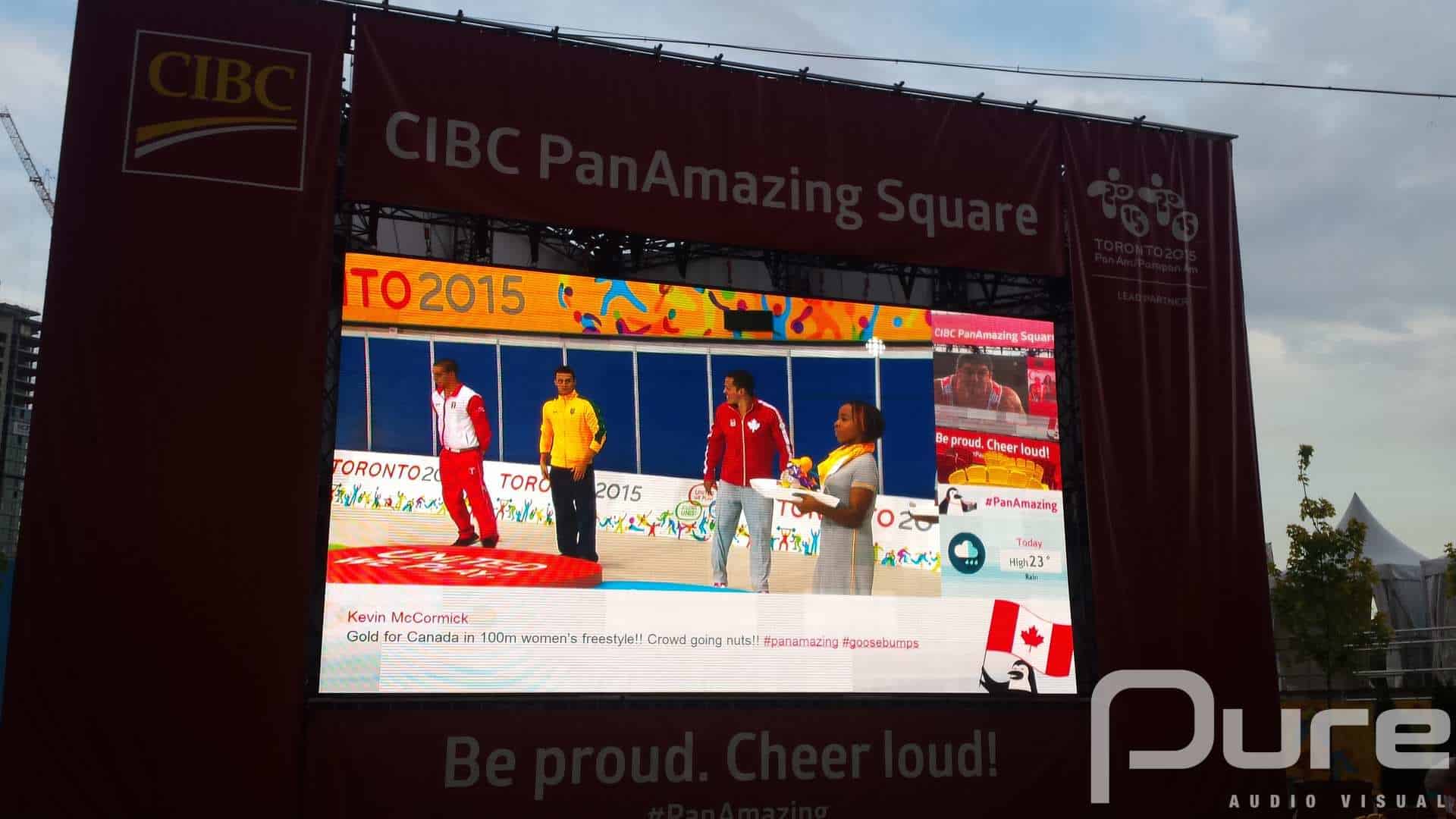 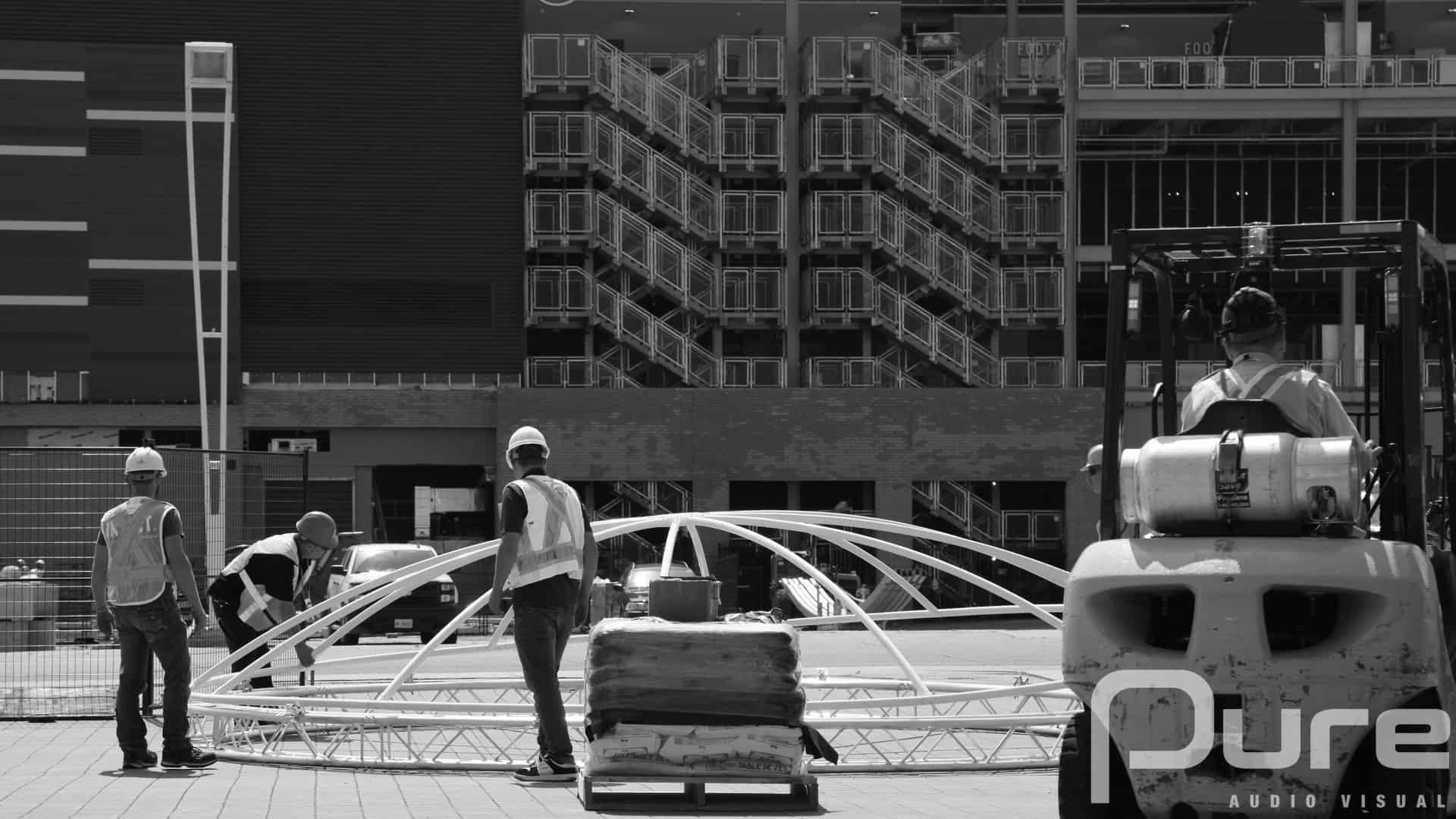 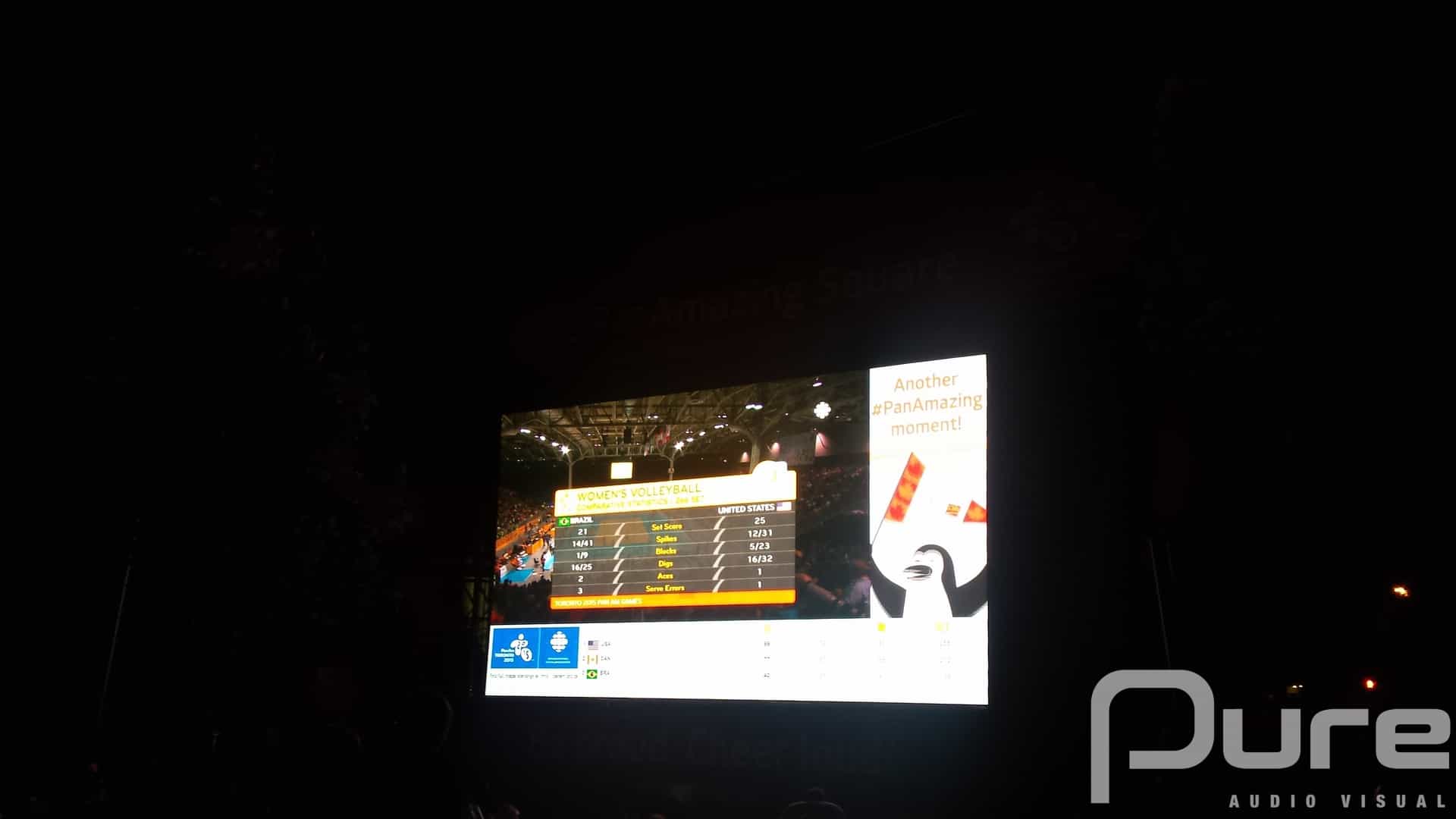 What was the client asking from you when they first called you?

The main objective was to provide a screen large enough for the audience to view the PAN AM games from approximately 150ft away, given that it was the footprint of our location. On the programming side, CIBC required us to digitally divide the screen into 4 sections; live feed, medal count, weather updates and twitter feed. We also worked with Bell and Rogers to establish a solid video feeds via the onsite NewTek TriCaster TCXD300. CIBC also had their own watermark with specialized commercials during competition breaks. All of this had to be arranged and programmed down to the second. On the audio side of things, we wanted to focus on having enough volume to fill the designated area, while making sure that we were concentrating only on our footprint. Sound leaking would have created lots of issues with our neighbouring activities, so we had to avoid it at all costs possible. As a result, we chose to use line array boxes with side fills. See gear specifications for further details on the gear we used.

As the main bank sponsor of the PAN AM Games, CIBC was intent on creating a space that all visitors could enjoy while watching a wide variety of sporting competitions. High energy, multicultural and interactive. CIBC Pan Am Park ultimately offered all of the guests a complete spectator experience. The Common Domain was the hub of the park’s seven venues which offered ticket holders, Live Nation guests and the general public a chance to catch PANAMANIA and be a part of the action surrounding the games.

Audiences ranged from a few hundreds early in the day, up to a few thousands as the evening approached and the main competitions took place.

Intent was to expose the CIBC brand with a wide range of branding, but also create a place where all fans alike could cheer for their country and athlete of choice.

The client requested a massive LED video wall that could withstand month long outdoor usage. On the operations side of things, we had to switch between a wide variety of feeds, custom CIBC commercials and variable screen (cut up) looks. Audio had to be loud and clear, however concentrated to our area.

Quick summary of how you put together the show at the venue/space given.

The challenges on this show were rooted in preparation and safety. Anytime a structure of this magnitude gets erected, planning has to be on point. After countless hours of planning and double checking every potential pitfall, we teamed up with engineers and electrical professionals to make sure that all aspects of safety and regulation were covered.

Without any question, building a 30ft megastructure outdoors poses its challenges. The number one focus was to make sure we followed all of the city rules/by-laws. Engineering stamps of approval were also necessary as per CNE grounds regulation. After we took care of the paperwork, a team of our top technical leads worked to figure out the best way to build the structure. We concluded that a 100,000 pound crane would be the best option to lift the structure as it was being built from the top down. To secure it in place, we placed 20 x 2 ton cement block on every truss base and anchored it to the top of the structure with 3/8 aircraft cable. Tensioning was controlled by heavy duty Crosby turnbuckles. Undoubtedly, safety was our number one concern.

Medal counts and live feeds created lots of interaction via social media. Everyone from the audience loved seeing tweets up on a massive LED video screen; especially when cheering for a country and/or favourite athlete.